Weekend is here! And what a good time to catch up on the more unknown titles and hidden pearls we came across these last weeks. So sit tight and take notice 😉

Publisher Iceberg Interactive is excited to announce it has signed a worldwide publishing deal for the epic 4X strategy game Oriental Empires (PC). The game is currently set for a summer 2015 Early Access debut on the Steam Platform.

Development of Oriental Empires is led by R.T. Smith and John Carline, two veteran strategy game developers with more than 30 years experience between them. Previously they worked together on the Total War series of games, in roles including Project Director and Lead Artist, and have credits on many other AAA titles from studios including Crystal Dynamics, Pandemic, Frontier Developments, and Slightly Mad Studios.

Oriental Empires is a turn-based 4X style civilization-building game set in ancient China. It will feature both single-player campaigns as well as a multiplayer mode. Oriental Empires covers the period from earliest recorded history, until the widespread adoption of firearms (roughly 1,500 BC to 1,500 AD) and aims to realistically depict the world of ancient China, with a focus on the unique aspects of its civilization. This extremely deep strategy game includes both an historic scenario on a realistic period map of China, and skirmish-style scenarios on random or user-generated maps.

“We are extremely pleased to be involved in the upcoming release of Oriental Empires; it really is such a beautiful, deep and elaborate game that we can’t possibly list all of its intriguing features in one press release,” says Erik Schreuder, CEO at Iceberg Interactive. “There are also many detailed future plans for DLC, user generated content and other additions, so this game is going to be around for a long, long time. Gamers can rejoice and get their first taste of a very complex and compelling strategy game come the Early Access release this summer. If you love strategy games, you can’t afford to miss out on this one!”

“We are delighted to be working with Iceberg Interactive, and very excited to finally announce our project Oriental Empires, which we have been quietly developing for some time,” says R.T. Smith speaking on behalf of the developers. About Oriental Empires
Step into the world of the ancient Orient. Control a city or tribe from the dawn of Chinese history, and turn it into a great empire. Develop your land, create great cities, raise huge armies and fight epic wars. Advance your technology, culture and religion to create one of mankind’s great civilizations. All the action takes place on one spectacular game map that brings to life the mountains, forests, plains and deserts of China. Zoom in close to review your troops and see your peasants toiling, or zoom out for a strategic overview. Plan your battles, end your turn, and then watch as your armies obey your orders, with hundreds of soldiers battling right on the game map.

FIRE has been awarded by the jury of the German Computer Game Awards with ‘Best Kids Game’. FIRE has not been designed as a kids game, though, but earned the award due to its clear, stringent game design and inherently enjoyable gameplay by using an intuitive game design to tell a story without words! By following the adventures of Ungh the Neanderthal, players will have to master the trickiest task of the Stone Age… finding fire.

As Ungh, it’s up to you to explore the colorful world of FIRE and to solve all puzzles in the most creative ways possible. Always helpful are the quirky creatures of this unique Stone Age setting: why not using a mammoth and its trunk to shoot a coconut? Be it mammoths, bats or dinosaurs – FIRE’s colorful Stone Age world is inhabited by all kinds of useful and entertaining wildlife.

A key part of the story, of course, is the slightly clumsy (yet highly comedic) Neanderthal Ungh, who’s also our hero. Ungh starts out as you’d expect – a bit dopey and very unlucky, and unfortunately, he’s let his village’s bonfire burn out during his watch. Now he has to get a new flame, which sets him on a quest to explore every corner of his prehistoric world. Be it a jungle, veldt or the inside of a volcano – no place is safe from Ungh.

The urge to explore has no limits in FIRE – a click on every object triggers a reaction from Ungh or his surroundings – and with a bit of logic players can get closer to the puzzle’s solution. For example, some locations can be visited at day and night – a click on the sun or the moon is enough to change the time of the day, which not only influences the lighting conditions, but also the behavior of the creatures. Diurnal monsters will sleep at night, others will wake up or show themselves only when it’s dark. Taking the time of day into account is just one of the many keys to making the most of Ungh’s adventures!

Brawl is a new party game where up to 4 players enter maze-like levels and are forced to drop bombs or use special abilities in order to survive. Think Bomberman meets MOBA, with Hellraiser-esque environments and 8 twisted characters — each with their own one-hour, single-player campaign narrated by THE WALKING DEAD’S Erik Braa.

Like any good party game, BRAWL features a variety of multiplayer modes that can be enjoyed with up to four friends sharing a couch together or challenging each other online: a classic Versus mode, Color Domination (akin to Splatoon), Sumo mode (players push each other off the map), Sheep mode (players must protect a flock of sheep from waves of minions), and many more. No matter what mode you go for, you’ll be on the edge of your seat at all times — frantically placing bombs while trying to outmaneuver (and trap) the competition . . . then blow them to bits.

“We wanted to make BRAWL the ultimate party game for the PS4. There aren’t many party games on the PS4 right now, and we hope to give gamers a reason to invite a bunch of friends over and game together again. We know we screwed up big time with Basement Crawl, and this is our chance to make things right. Anyone who bought Basement Crawl will receive BRAWL free of charge!”

The Cosmos is MINE!

Australian indie developer Playcorp has launched its ambitious and engaging new real-time strategy game, The Cosmos is MINE!, on Steam Early Access. Set in an alternate 1950s universe, The Cosmos is MINE! is a multiplayer RTS where gamers control a galactic prospecting team in an interstellar resource war against other greedy space miners.

With an engrossing two-method system to victory and amusing tongue-in-cheek setting of space-faring super-capitalism, the first new Early Access launch trailer for The Cosmos is MINE! is here for all to enjoy 😉 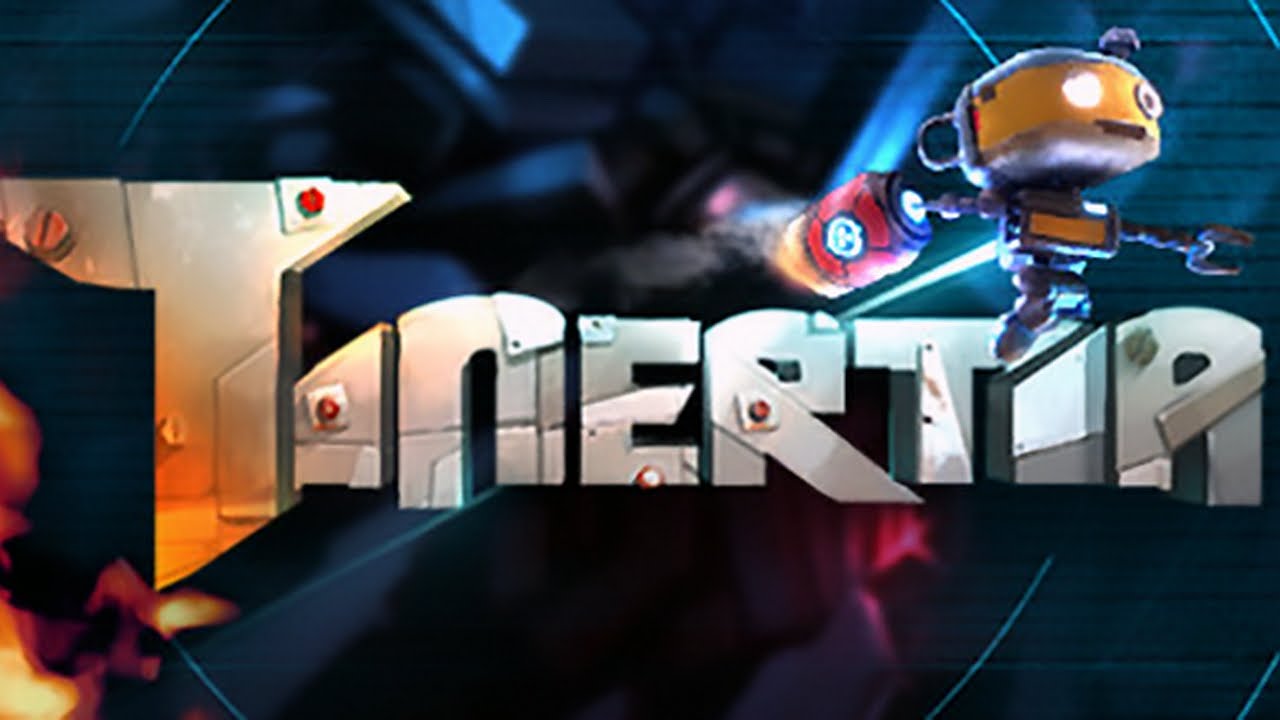 With its debut at the PlayStation Experience in December 2014, Tinertia stars the inauspicious robot Weldon who is equipped with a powerful rocket launcher that allows him to propel himself through a kaleidoscopic series of challenging industrial environments. He is stranded on a planet controlled by the evil ARC that has identified Weldon as a threat and is now prepared to destroy him at any cost.

Geared for the streaming generation with easy to pick-up but tough to master mechanics, Tinertia challenges gamers to master rocket-jumping. Players will control the momentum, rhythm, and speed of Weldon launching him over deadly obstacles, outrun robo-bosses, and ultimately escape off the planet.

“Today’s gamers want an experience that’s fun to master and equally fun to stream and watch with friends,” said Vilas Tewari, CEO and programmer, Candescent Games, Inc. “With that in mind, we designed Tinertia to be a skill based action platformer. Its mechanics are easy to pickup and a spectacle to behold in the hands of a master.”

Plugged is an unique project that offers adventure games’ fans what they love most – decision-based narrative with multiple different paths and endings, that depend solely on choices player makes throughout the game. Developed on Unreal Engine 4 for PC, Mac and Linux is best when experienced on Oculus Rift, although works just as good on your regular PC without the VR headset.

Endtimes Studio – the team behind the game, consist of experienced devs previously working for Blizzard Entertainment, TakeOne studio, Games Workshop and Eipix Entertainment among others. They are now seeking for a 20,000 GBP funding on Kickstarter to bring Plugged to life. You can support their efforts by visiting the campaign page.

This world was created by artists who successfully and creatively mix ‘50s pin-up visual style with tons of pop-culture references, jokes and knowing winks towards your way. You can read more about their approach and see some references on the latest dev blog post HERE. Whether you are a Twin Peaks fan, X-files freak, more into J. M. W. Turner paintings or a graffiti lover (SAMO© anyone?) you’ll find in Plugged something that will make you smile. At least. Which doesn’t mean the game lacks of a more serious atmosphere. It will send some shivers up and down your spine more than once. Trust us on that one.

Independent publisher and developer NeocoreGames revealed two new deadly player classes for its upcoming title, The Incredible Adventures of Van Helsing III. Arriving on Steam this May, the popular gothic-noir steampunk action-RPG series influenced by Bram Stoker’s Dracula features the Elementalist and the Protector. The Elementalist masters the arcane arts and can tap into the powers of nature, while the Protector is a close-range specialist with heavy armor and unique shield slot.

The Elementalist can unleash terribly damaging forces from a distance, although his lack of defenses leaves him vulnerable in melee combat. Fortunately, he can wipe away monsters with a flick of a hand or send in moving pillars of frost to discourage the enemy from trying to get too close.

The polar opposite of the Elementalist, the Protector is a close-range armored specialist. He deals heavy physical damage and provides bonuses for his companions. With his vast array of abilities he can charge right into the middle of the battle, knocking down his enemies or jump right in from a distance to begin the fight.

The Elementalist and the Protector join the weapon-heavy Phlogistoneer and the spell-casting Umbralist introduced earlier in April. NeocoreGames plans to reveal the game’s final two classes soon.

Van Helsing III offers single-player gameplay, four-player co-op online and eight-player PvP, and is the last episode in the Van Helsing trilogy. Van Helsing III will uncover the past of the cheeky companion, Lady Katarina, while carrying over features from the second game, including the tower-defense mini-game sequences, and offers six unique character classes. Look for NeocoreGames to reveal the final two classes soon.