Before you even had time to miss it, we are already back again with another edition of Inside Indie with the some more unknown titles to broaden your horizon in gaming. We received several press release and mails with new games and new studio’s, some totally new to us and probably to you guys as well.

This episode is packed with different kind of games…as diverse as the alien races in Star Wars: Smaller fun phone games, pinball tables, puzzles, spooky houses or shooters in space….too much to name 😉 …so let’s get started! 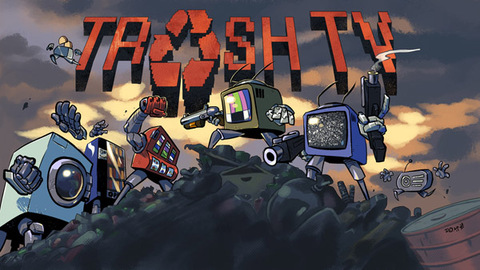 From the mind of UK-based indie developer Lawrie Games Ltd., comes a story of redemption… dated technology… and platform puzzles solved with guns. Coming to Steam on February 23, Trash TV will delight gamers with the stylish combination of action, puzzle solving, and platforming gameplay.

“It’s both a bit scary and exciting that the launch of Trash TV will be coming soon,” said Lawrence Russell, founder and sole developer at Lawrie Games Ltd. “I hope gamers will appreciate the retro stylings that harken back to those days of watching TV on old tube televisions. And combining these visuals to some pretty hardcore gameplay elements like rocket jumping will make for weirdly unique gameplay experience.”

Cast away into a recycling center, Trash TV players take on the role of an outdated tube television animated to life with a singular goal – to find the original remote control and become fully functional again. Get ready to navigate through the perilous pathways of the recycling factory, avoid machines set out to flatten and pulverize your humble little TV into scrap parts, and pick up various weapons of wicked destruction to use against haywire machines as well as solving puzzles through explosive solutions. In CastleStorm pinball, players will team up with the heroic knight Sir Gareth as he returns once more to protect the Kingdom from the relentless hordes of vicious Vikings and their raging leader, Chief Ramhorn.  The CastleStorm table features single and multiball game modes set within a Viking stronghold, an enormous fire breathing dragon, an armored troll, and even a charming donkey! The second table in the pack, Wild West Rampage, stars Cindy, a bold bounty hunter who arrives in the western town of Rackton Point with a bone to pick with the town’s crooked Sheriff Evans. Cindy has her sights aimed on defeating his men and ruining their crooked plans to control the town, but it definitely won’t be easy to loosen Evans’ stranglehold. Hit the trail and experience an exciting Western-inspired playfield complete with a rolling 3D steam engine, swinging saloon doors, a six-shooter ball locker, and duels with members of Sheriff Evans’ posse! Cowbeam can best be described as a singleplayer “Who is it?” with planets instead of faces. You need to gather hints that point you towards the right planet where a cow resides. These hints range from the planet’s color to its size, and from the planets vegetation to the amount of moons orbiting around the planet.

Finding the cow is not all that matters, you’ll also want to find stars, hidden within the solar systems. These are used to unlock new levels and upgrades, preparing you for the more difficult levels ahead.

The cows you find are stored in canisters and become a colorful collection. There are even some very special cows to be found throughout these galaxies.

In the video – featuring prototype footage – Tim Stellmach (Lead Designer) and Chris Siegel (Senior Producer) describe how players will be able to manipulate the environment to come up with creative solutions to defeat their foes in the ambitious RPG.

There’s also an update from the development team detailing how the Stygian Abyss (the vast underground labyrinth famous from the original Ultima Underworld) is being treated as the central character in Underworld Ascendant.

Jihii is a fun and modern take on the popular jigsaw genre. This addictive game is for all ages and trains the brain by placing special puzzle pieces on a wooden board. Cover all the holes in the board to complete the level and earn rewards. A handy hint system will help puzzle fans to get through the 400+ challenging levels!

We are happy to introduce a few new names to the Inside Indie section, starting with Dixidiasoft. Dixidiasoft Ltd is a brand software house focused on videogames production founded by self-employed freelance developers.

At the moment they are developing The Steampunk League, a 3D isometric platformer for PC set in alternative Victorian Age, revolving around the story of Nikola Tesla and his eternal rival Thomas Edison. In this universe, Tesla managed to get rich thanks to his inventions, leaving Edison on the edge of bankruptancy. When the entrepreneur steals Tesla’s secret invention, he has to retrieve it together with his comrades: H.P. Lovecraft, E. A. Poe and Ada Lovelace.

The Steampunk League has been approved on Steam Greenlight by the Steam Community.

We also were contacted by Aldo G Turati, his awesome game is on Steam Greenlight now and needs your votes…well I need your votes as well because I want to play the game as well 😉

Solo: Gaze into Madness” was developed during the last year of college. A thriller puzzle inspired by magic realism, a genre where magical or unreal elements play a natural part in an otherwise realistic environment, for the narrative work and Escher for the non-Euclidean space.

Solo’s story revolves around the life of Sebastian, a press photographer that can’t seem to remember anything else than the headlines and photos made on his career. On his journey he will be confronted with all series of mind-bending puzzles while his memories begin to haunt him.

In Solo you will have to think outside the box in order to find the exit within the room. This will be accomplished by watching and reading Sebastian’s memories while experiencing his anxiety and fears.

Since its inception Solo has been thought as a suspense/psychological horror game where the player must lose notion of the spatial logic. At any given time you will start exploring the dark side of Sebastian’s memories.

Inside the game you will be faced against multiple non-logical spatial changes where you will have to stop doing the same thing over and over again.

We also received a mail from Titan Forged Games, a small 4-man dev team based in Coimbra, Portugal. They have made the game Slinki.

Slinki is a hard-as-nails 2.5D action-platformer, for Windows, Mac and Linux, where your own prostetic arm is the ultimate multipurpose weapon: Use it as a bladed boomerang to control the population of mutated critters, pull levers towards you to get through puzzles and zip-line across grappling surfaces.

Furthermore, instead of having your weapon return to you, why not return to it instead with the power of Slinki’s slingshot? All this to find out what happened to the once peaceful forest you used to live in.

The game is available on Desura and there is a steam greenlight campaign as well for now. Uberactive Game Studios is a two man indie studio from Germany. The only thing they love more than playing games, is making games. They have made two games and we will share one of them in this episode; Jaeger Strike.

In Jaeger Strike you pilot a ship through different sectors and fight against dozens of enemy types and combat turrets. Experience impressive backgrounds in front of fast audio tracks that immerse the player in the game and into space.

A short backgroundstory. TIME 2822 It is the aftermath of „The Second Imperial Conflict“ which took place between the United Liberation Front (ULF) and the Imperial Stabilization Forces (ISF). After the ULF liberated the sectors Alpha, Beta and Gamma from imperial tyranny, scattered ISF-Troops retreated to abandoned sector Delta. TIME 2837 . 211 The ULF sent a recon fleet to patrol the area and check for last ISF activities. But meanwhile, the resistance reformed.